acceleration of progress towards achieving the Millennium Development goals and confirming the need for a stand- alone goal on gender equality and women’s empowerment in the set of international targets that will be introduced once the MDG’s expire in 2015. The Agreement also stresses the need for gender equality and women’s human rights to be integrated through targets and indicators into all goals of any new development framework.

The compromised Agreed Conclusions have many progressive paras but do not go far enough. As the EU declared this year’s outcome should hopefully expand next year.

In the text there is no sign of reversal of doing business as usual that is of transforming the current vicious circle of development focused on economic growth alone that fuels inequalities, environmental degradation and marginalization to a cycle focused on human rights and justice.

For example para 21 bis of the draft Agreed Conclusions of 17/05/2014 was asking for a shift from the current economic model which perpetuates gender inequality and women’s poverty on the basis of the ongoing crises that reflect the need for it. The para was traded away for the sake of making an agreement.

During CSW there has been strong resistance to talk about human rights as central to development. This means that we cannot be very optimistic for the future as there cannot be sustainability in any development model without human rights. Member states should demonstrate the necessary political will to take a transformative roadmap for the future.

The issue of political will backed by commensurate resources was also stressed by the Executive Director of the UN Phumzile Mlambo Ngcuka, who said that the Agreement of the CSW represented a milestone towards a transformative global development agenda that puts the empowerment of women and girls to the center.

The Minister of Egypt also expressed her fears that we might not find that the 2015 agenda is good for women.
The agreement on a stand-alone goal was not an easy job due to a small but very vocal conservative opposition. A stand-alone goal recognizes that sustainable and meaningful development must address the rootcauses of gender inequality which deny women and girls an education, the right to make decisions about their bodies and childbearing, a decent employment and equal pay for equal work and to live free of violence.

I will now refer to the position of different states and groups of states concerning major issues of controversy .The Holy See demanded to remove from the CSW document reference to sex workers, lesbian, gay, transgender and bisexual rights, and some of the wording around sexual and reproductive health and rights specifically that related to abortion and sexuality education. It also wanted the document to include explicit reference to the importance of the family, that is family in its traditional nuclear sense.

Mexico, the EU and other states pushed for family in its different forms, simple parent families, child or female headed households, or same-sex families because the wording of the family if used can reinforce gender roles and stereotypes: women or wives, mothers, homemakers.

Finally the language adopted on family did not recognize the diversity of families.

El Salvador, Mexico, Colombia, the Philippines and other states have defended the inclusion of the particular situation of lesbian, bisexual and transgender women in the Agreed Conclusions.

Argentina, Brazil, Australia, US regretted that sexual orientation and gender identity (SOGI) was left out.

The African Union voiced its reservations regarding family, sexuality education for children and the paras on official development assistance (ODA) which they found were not strong enough, sexual orientation and gender identity and sexual and reproductive health and rights.

It is interesting to note that South Africa and Egypt broke away from the group. South Africa supported the whole Agreement in particular sexuality education.

The African Union threw this year again a sovereignty clause allowing them to sign the outcome document but ignore the bits they do not like, usually points that could potentially restrict cultural and religious practices.

Another issue on which the African Union put emphasis is the precedence of religious and ethical values, cultural backgrounds and philosophical convictions as well as national and regional variations over the universality of human rights in particular women’s human rights.
Doing so according to them should contribute to the full enjoyment by women of their human rights in order to achieve equality, development and peace. The final text adopted was much more balanced. The wording put an emphasis on the duty of states regardless of their political, economic and cultural systems to promote and protect all human rights and fundamental freedoms while bearing in mind the significance of national and regional particularities and various historical, cultural and religious backgrounds.

Many states had reservations about sexual and reproductive health and rights and sexuality education like Russia, Norway, Brazil and others regretted that sexual rights were not adopted this year and expressed the view that next year we should work to have them accepted.

China supported the stand-alone goal and national sovereignty while the US regretted that women’s crucial role in climate solutions was not highlighted.

The paras that were strong have to do with violence against women and girls. There was agreement to eliminate all harmful practices including child, early and forced marriage and female genital mutilation. They also called for the elimination and prevention of violence and for the prosecution of perpetrators.

There was also strong language concerning paras that had to do with upholding women’s sexual and reproductive health and rights.

There were explicit references made to a woman’s right to access “quality comprehensive sexual and reproductive health care including emergency contraception, information and education, safe abortion where allowed by law and prevention and treatment of sexually transmitted infections and HIV.”

Furthermore the Conclusions called for the recognition of the human rights of women to decide freely and responsibly on matters related to their sexuality free from coercion, discrimination and violence.

The governments recognized that progress towards achieving the Millennium Development goals has been held back due to persistent unequal power relations between women and men and called on governments to address discriminatory social practices, laws and beliefs that undermine gender equality and to strengthen accountability mechanisms for women’s human rights.

Feminist groups as well as women’s and community based organizations have been recognized in placing the interests and visions of women at national, regional and international agendas.

The Agreed Conclusions publicly acknowledged the important and legitimate role of women’s Human Rights Defenders in the promotion and protection of human rights and asked for appropriate and practical steps to protect them.

Finally I think we should start working on an issue of particular importance. That is how feminist and women’s organizations could participate in the design ,implementation ,monitoring and accountability mechanisms for development processes and the stand- alone goal on gender equality, women’s empowerment and women’s human rights and its integration into all other goals of the post 2015 Development Agenda. 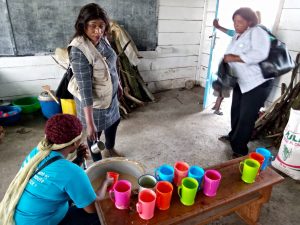