On December 17  2012, India woke up in shock to the Nirbhaya incident, a gang rape of unimaginable brutality. The woman called Nirbhaya for the courage with which she clung onto life for 13 days became an icon for India’s women. Her rape sparked candle light marches, protests and demands for action. Five years later four of her rapists were finally sentenced to death. One had already committed suicide in the jail and the last, who was 16 when the rape was committed, had been rehabilitated – though he was apparently, according to press reports, the most brutal of them all. Ironically, the latest amendment to the Juvenile Justice Act 2015 (post this case) has put the bar at 16 years for a male to be tried as an adult for heinous crimes

There have been rapes equally brutal which have gone unnoticed or unpunished simply because they took place in the rural heartlands of the country where the people involved were too poor to protest. Children are raped, babies are raped, old women are raped and the word becomes a joke in the mouths of politicians.

The problem is the objectification of women and an underlying belief that they can be used as battering rams. In a country where daughters are destroyed, gender violence is a part of everyday life, a woman on her own is fair game to a patriarchal society, or even, as in the Nirbhaya case, a woman out in the evening with her boyfriend.  In the Nirbhaya case, the woman clung onto life demanding that her rapists be burned alive for destroying her life. Others have not been so fortunate – their violators have done an efficient job of killing them after the rape and disappearing into the night.

Where the criminals have been caught, courts have shown a vacillation in the sentencing. In February 2014, for example, even after the Nirbhaya case, Justices B S Chauhan and M Y Eqbal found a man guilty of raping his friend’s daughter and strangling her afterwards. Despite the fact that the girl called the rapist uncle, he was given 35 years in prison instead of the death penalty. In February 1999, a culprit was reprieved because his act was not intentional – he had found a minor girl on her own at night, raped her and in gagging her, caused her death. An Allahabad caught sentenced the man to death but a bench of Justices set it aside saying that it was not that rarest of rare cases which deserved death. In December of that year a four-year-old was kidnapped, assaulted and murdered – her rapist too went free because there were inconsistencies in the evidence. The Supreme Court in Haryana commented that for the most part decisions were judge-centric rather than principle based.

Over two decades, this indecisiveness has only served to strengthen the feeling that India’s women of a certain class are of no relevance. Two-year-olds, five-year-olds are all disposable in the scheme of things and pathetic bodies stuffed in gunnysacks are forgotten in a world obsessed for the most part with survival.  A spiritual leader Baba Asaram, also incidentally accused of rape, commented that Nirbhaya was as guilty as her rapists and should have called them her brothers and recited mantras to them. Another extreme Hindu Right supremo claimed that rapes occurred only in cities because women wore ‘less clothes’. While a third said broadly ‘boys will be boys’.

Has the Nirbhaya verdict changed anything for India’s women? Hardly. An eight-year-old was raped a week after the Supreme Court sentence in a recently inaugurated school in Patna. Nirbhaya is an ‘ideal’ that no one will apply to the rest unless India’s prominent women continue to protest publicly and vociferously – and even then the outcry will not touch the backwaters. God, a woman said, sees the truth and waits. 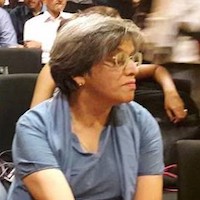